Hello All!  This is what you've been waiting for.  I have implemented sound into Super Mario 2 3D!!  Its not complete, but it will give you an idea of things to come!  The new Version to DownLoad is v0.52 DEGUG BETA.  Please send any emails with feed back about what you'd like to see.  Also, I would like if someone could make a MilkShape Model of Mario. Well, Check it out, and look for more updates soon!.  --SSvegita4


What eye've been working on: 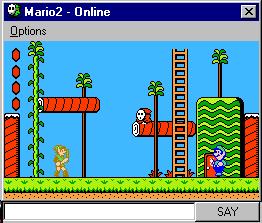 Click the pic to find out about his game.

Eye made some links to some cool Flash Stuff made by DarkKnight13. Check 'em out HERE

Monfriez@usa.net
New pics have been added to the Before and After section.
Hi I'm Monfirez, I've been helping Brandon Koopa with some of the art for SMB2 3d. If you have a request or would like to contact me my e-mail address is at the top of this news update next to my icon.

Super Mario Bros. 2 in 3d needs your help!
Brandon Koopa is looking for programmers and artists. If you are up to the challenge contact Brandon Koopa NOW!

02/10
Super Mario Bros. 2 3D version 4.2
It has:
-The New Intro Screen
-Eneregy Bars (in the corner of the screen)
-and mouse toggle (by pressing 'M') so people can use the mouse to make their window smaller to make the game run faster and smoother (for people that don't have an accelorated graphix card).

I've been staying up LATE so eye can finish this 3D model load for the game. I used it for the Intro screen for now. There'll be a LOT more added soon, TRUST me...

"What's the point in the Walk-Through-Walls version?!" The only difference is that YOU CAN WALK THROUGH WALLS! There are no wall barriers, so it's easier to make your own worlds and graphix.  PLEASE send your worlds you make to: BrandonKoopa@HotMail.Com so eye can post them up on this site and/or use them as levels in other releases.

Click the pic right bellow to check it all out:

Well, it's up to version 0.3 now. So take a look if you want. All it is is complete wall detection (so you can't walk through walls, heh-heh)

Eye've been doing some OpenGL (for C++) and eye started to make a 3D version of Super Mario Bros. 2.
What eye have so far, only took a few hours, so that means it won't take LONG until this game gets REALY cool... click thee pic to check it all out:
Super Mario Bros 2. - in 3D

1/26
More Game Hacking Docs are being put up. If YOU have any HEX information for ANY game that's NOT on this page, please E-Mail some to: BrandonKoopa@HotMail.Com

1/24
Well, haven't been able 2 work on "Simon Says" very much because eye'm in thee middle of MOVING. Eye have added some screens to edit, though. You can edit about 40 screens SO far...

1/16
Well, there's of release of my Castlevania 2: Simon's Quest Editor, Simon Says. In version 0.2, you can edit the town and it's rooms and the first path of monsters (7 screens).
Check it out!

If it's not working, get some files from the download page.

Just what eye like, a good 'ol update. Just messing around with some data that eye found on thee NET . Eye made e little:
"Mario's Beauty Salon". So go check it out. It only edits the colors of Mario and Fire Mario, butt hey, it's just 4 fun! Who knows, maybe it'll update it 2 B better. BLA.

11/16
Eye started a Windows Castlevania Level Editor yesterday,
eye've gotten a good amount done so far. If you wunna check
it out go to the CastleVania Page.

11/16
Finally, eye have a newer version of ZELDIT out.
Eye'm also trying out some other things for another
editor. Eye've started a VastleVania Editor. You can
only paste graphics on thee screen, butt it can't fully
write to the ROM. It can read from the ROM though...

11/09
Eye've been talking about doing the OverWorld Editor,
and eye've finally started working on it. With what eye
have SO far, you can only change what the screen layout
is. It'll be like the Level Editor, not like Zelda Improvement.
You won't be able to create screens row by row, although
in thee future you'll probably B able 2 create you're own
rooms in ZELDIT, then paste them whever you want in
thee game... make sence.... bla. Anyways, you'll C.

10/19
Eye did some changes to the Zelda Hacking Page, eye added some of my own
info. Come on! Let's see some Zelda games coming through here. Eye know,
eye wish eye COULD work on ZELDIT more. Someday soon. Don't be afraid
to E-Mail anything Zelda ya got!!!

10/16
Well, eye posted the Source code to ZELDIT B-cuz eye'm just not working on ZELDIT.
So, for those who have Visual Basic, you can do your own changes. For those who can't
use Visual Basic or whatever case, eye posted a Zelda ROM Hacking Page (in case you
haven't noticed).

Eye'm doing this ex-specialy B-cuz Zelda: Majora's Mask is coming out soon, and eye
will not be able to peal myself off of it 2 work on ZELDIT. Bla. have fun with all of this.

Yes, there'll still be updates with the Zelda ROM Hacking page, probably more ZELDIT updates,
and all of that good stuff. Keep an out on this page, Okay?

For those who have any cool Zelda ROMs or a better version of ZELDIT, send me your cool
stuff. Eye'll post up thee goodies. heh.

Another thing you can do it check out this awsome program: Zelda Classic.

10/09
OK, eye haven't been working on ZELDIT for a bit. Eye've just been busy with work and school,
you know. Butt eye DID finally started to work on ROM Reading. Before, ZELDIT was Write-Only
program, butt now you'll be able to see what you're actually editing. So far, eye only have Level 1.
So hold your horses. It shouldn't take 2 long to do... Come back soon.

10/07
Eye think that there was a problem with the Destination window. Eye had a weird path already
set. Now it just starts as Zelda, so have your Zelda ROM in your ZELDIT Folder. Or have the
directory before your filename (like: C:\NES\GAMES\Zelda.NES) in your Destination Window.

After messing with all of this Zelda stuff, eye've finally started my own Zelda game. Eye only have
Level 1 right now, butt eye'll post what eye have.

If you have any Zelda ROMS (that AREN'T the orignal), eye'll post them up here. Just let me
know what was used to make the ROM, if you can.

10/04
Sorry that there hasn't been an update for a while, eye've been SO buisy with school and work.
Butt eye DID do a Zelda Story Editor that edits the Story at the Beginning at the game, it's pretty
nifty. Eye'll finish up the colors and upload ZELDA v0.52.

Eye've got SO much MORE info on Zelda that people have been sending me. So, in the near
future, ZELDIT will be BIG. You'll see an Overworld editor, Dungeon Editor (of course),
Story Editor, Color Editor (probably), Screen Layout Editor, and maybe Title Screen Editor.
Eye wish eye could make a sprite editor like in NESticle or The Mario World Editor, butt eye
don't see that happening.

Oh, another thing eye found, is what's beneath where you are. What's inside the cave, tree, or
stairway. So that's 1 of the things you'll find in the OverWorld Editor.

Eye played "The Legend of Zelda: Majora's Mask" at Wal-Mart. Eye almost wet my pants when eye saw it there.
We're ALL in for a BIG treat! Check out your Wal-Wart, they'll probably have it there.

Come back in a fews hours, eye'll have that update. Coo?


9/29
More levels are comin' in. It's easier to add these levels to edit, now that
Eye have ZELDIT all figured out.

9/28
Eye'm now at the point in making ZELDIT that it's very easy to add the
Level info into it. Eye have Level 4 now, butt eye'll have more VERY soon.
So check back in a day or so.

9/27
While Eye'm finding a bunch of Zelda ROM info, I'm turning it into a Zelda Editor.
Eye'm just starting off with the dungeons. I DO plan to someday to the overworld
editor, butt you have Zelda Improvement. I plan to make an overworld editor B-cuz
Zelda Improvement doesn't edit monsters, objects, level pointers, or anything like that.

Come back in a day or 2 to find a newer version of ZELDIT. As eye make changes, eye'm
keeping them posted. It think it's funner to post all these changes rather than just 1,
and only 1, change.

Once eye'm done with the Dungeon Editor, yes, I DO plan on releasing the source code
so you can make your OWN changes to ZELDIT with Zelda ROM info YOU found.